Matt Cohen's acting portfolio is impressive, which makes it easy to assume he dreamed of becoming an actor all his life. Yet, he didn't realize until late in his college years that he wanted to try out acting. That's when a star was born.

Matt attended American Heritage from 2nd grade through 12th grade and graduated in 2001. He played football through high school and dabbled in the fine arts through the years. "I continuously took drama classes with the fantastic Mr. Usher," he says. "He had such patience with me and my jockey football buddies and really tried to teach us about what acting truly is." Matt took part in plays such as The Wizard of Oz and The Nutcracker when he was in 6th or 7th grade.

While at Heritage, Matt recalls he had so many wonderful experiences led by so many extraordinary teachers and role models. "They paved the way for me to be a better man by teaching me a work ethic and discipline for maintaining a healthy and balanced routine, both mentally and physically, throughout my daily life as a career man, a husband, and a father."

After graduation, Matt attended Florida State University for three years on an academic scholarship and then decided he wanted to take a few months off, go to Los Angeles, and give acting a try. "One success led to another success, and I ended up staying in Los Angeles from that point on," Matt says. "I would love to go back at some point and finish out my credits so I can graduate. That being said, I studied everything from advertising to architecture in pursuit of a business degree." 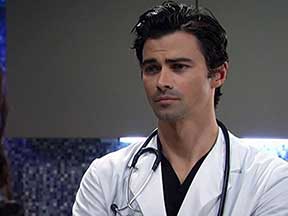 In the past almost 15 years since living in L.A., Matt has worked on a number of TV shows and movies. Currently, he is playing one of the lead doctors, Griffin Munro, on a daytime television show called General Hospital. He recently finished portraying the role of Levi Wescotas in How To Get Away With Murder, played the important role in the Winchester family tree on the hit television show Supernatural, he was Jeremy in Season 4 of 90210, and the main role as Aiden Dennison in South of Nowhere for 4 years. That is where he met co-star Mandy Musgrave whom he fell in love with and married in 2011 and then had a son, Macklin, in 2015.

With the west coast of the U.S. as his home, social media has done a good job of bridging the distance and years with his buddies from Heritage. "I am basically friends with my entire graduating class on Facebook, and they continue to give me tips on how to be a better father and a better husband, which is completely appreciated. I graduated with a special group of people from an extremely special establishment. The lessons I learned at American Heritage have made my life easier and made me more capable as a human."