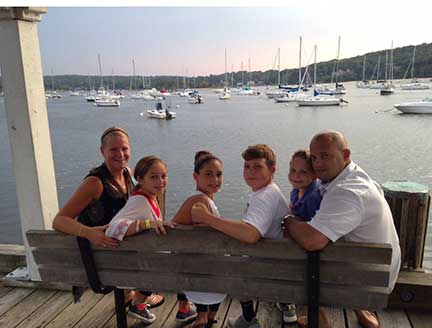 "AHS prepared me for college and after in a unique way," says Brian Parness, AHS Class of 1989.

For 17 years, Brian worked as Vice President of Investments and a financial advisor at Ameriprise Financial in New York. During that time, he married his wife Lisa, and together, they had 4 children–Matthew 17, Megan 15, Maya 13, and Jake 9. Somehow, Brian found the time to practice Brazilian Jiu Jitsu at Serra BJJ and get really good at it, because for the last 9 years, he has been actively competing on a national level.

Brian credits his years at Heritage for helping to shape his leadership and communication skills that are still applicable in his life today. That's what gave him the confidence to leave a big financial company and start his own firm–Parness Financial Services, Inc.

"I guess it was about time," he says. "Making this move was both exciting and nerve-wracking at the same time, but now that my transition is complete, being independent is totally satisfying, which totally justifies my choice."

Most of Brian's clients have been with him for many years. He still has the compliance and resources of a large institution behind him as the custodian of his practice, and he is always looking to grow his practice.

His advice to current AHSers is to diversify. Brian suggests joining clubs, teams, programs, "maybe even outside your comfort zone." He goes on to say, "Meet new and different people. This is the best place to try and find yourself. Take a chance!"

"We played football together in '87, and playing with those guys under the tutelage of Coach Brian VanGorder who went on to coach college football at campuses like Notre Dame, there were life lessons learned at a young age," Brian says. Lessons like thinking smart, respect, hard work, and good character were more important than anything else.

"We were a family, and some of my closest friends today are from my Heritage days." He says, "I'll always bleed black and gold."