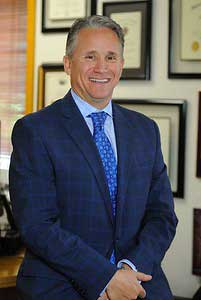 "For the past 25 years, I have been a criminal defense lawyer. I fight daily for individual rights and liberties; I understand the law and its collateral impacts. So, I decide to lend my advocacy to the State House," says Rep. Gottlieb.

Mr. Gottlieb grew up in Hollywood, Florida, and enrolled at American Heritage in 8th grade. "I attended Heritage for five great years and truly loved the small-school atmosphere and emphasis on education," he says. "I took a government class while at Heritage and wound up being selected to represent the school at Ronald Reagan's inauguration in Washington, D.C. That was the genesis of my political interests."

Heritage, Mr. Gottlieb says, helped him develop a strong work ethic. "I realized nothing comes easy. It instilled in me a sense of self and a confidence that I carry with me today. The school really helped prepare me for college and life."

After graduating high school, Mr. Gottlieb attended George Washington University, where he earned a degree in political science. He then received his law degree from Nova Southeastern University.

Today, the former assistant public defender is a busy litigator with an agenda to address mental health and environmental issues while representing his community in Tallahassee.

Rep. Gottlieb's advice to students interested in politics or advocacy? "Get involved early on. Get active. Let your voice be heard...activism begins with grassroots."